It was reported in the Journal of the American Medical Association (JAMA) that the 5-vaccine combination shot DTP-Polio-Hib (known as Pentacel) is associated with seizures in children. This innoculation against DTP (Diphtheria, Tetanus, Pertussis), Polio, and Hib (Haemophilus Influenzae B) is given to children at age 3, 5, and 12 months.

Let's search the VAERS database to see if the data agrees with this report.

To identify VAERS events that have seizure symptoms, we use the MedDRA symptom classification (a 5-level organization of all known symptoms). The top-level of the MedDRA does not mention anything about seizures, but the next level down (High-Level Group Terms, or HLGT) has a symptom category called "Seizures (incl subtypes)".

So search the data, check Expert Mode in the upper-right (to access different MedDRA levels), and make a Graph of Vaccine Type and Age. Also, open up Section 2 (Symptoms), check the MedDRA level HLGT and select "Seizures (incl subtypes)". This will organize all of the seizure-related VAERS events according to the diseases that the vaccine prevents (the Vaccine Type) and the patient's age.

The result is shown here: 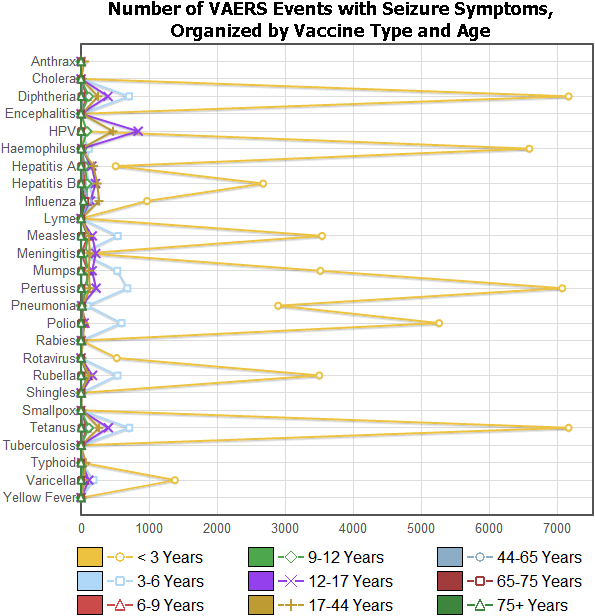 The result seems to confirm the JAMA report. The five biggest spikes are for Diphtheria, Haemophilus, Pertussis, Polio, and Tetanus in children under 3 years of age. No other age group gets seizures with as high a frequency.

Of course, this raises another question: is the DTP-Polio-Hib combination-shot the problem, or are the individual vaccines also culpable? For example, is it safer to get a DTP and then separate shots for Polio and Hib? The spikes for the five separate serums suggest that each one is reactive, and when combined could create a vaccine that is more reactive than most other routinely recommended childhood vaccines.

The only way to know whether a given combination vaccine is more reactive than its individual components is to divide the number of VAERS events associated with a vaccine by the number of doses actually given. This gives us the rate of VAERS events. Unfortunately, dosage data for Pentacel isn't available. However, dosage data is available for another combination vaccine: DTAPHEPBIP (known as Pediarix, a 5-in-1 shot with DTP, Polio, and Hepatitis B). Although this is not directly comparable to the JAMA article's study data, it does allow us to examine the reactivity difference between combination vaccines and their component parts.

So let's make a dose-adjusted graph, and look at the Vaccines, not the Vaccine Types. Once again, we look at seizure-related VAERS events, and this time we'll limit it to children under age 1. This gives us the rate at which a particular vaccine is associated with childhood seizures. Keep in mind that dosage numbers are always an approximation (see my July 2011 blog). Also, Pediarix dosage data began in 2004, so let's only look at data since then. Here is the relevant part of the graph (showing all of the DTP vaccines):

The results confirm that the Pediarix combination shot runs a noticeably-higher rate of VAERS events per dose than any of the other DTP vaccines (DTAP has a rate of 1 VAERS report per 155,000 doses given, but Pediarix has a rate of 1 per 93,000).

This data suggests that, when combined, vaccines are more reactive than when they are administered separately. My April 2010 blog showed that multiple vaccinations, given on the same day, cause more problems. It appears that multiple serums given in the same shot are also troublesome.