Last month, I investigated VAERS reports that involve pregnant women. I showed that these pregnancy-related reports were strongly associated with HPV vaccinations.

This month I want to continue the investigation by asking what happens to the women in these pregnancy-and-HPV-related VAERS reports. Are the symptoms related to their pregnancy or are they simply general issues? And if they are pregnancy-related, are they serious? To find out, I will look at the symptoms in these reports and see what they indicate.

The best way to look at symptoms in the VAERS data is to consider the fact that they are organized using the 5-level MedDRA classification system. So for starts, let's look at the top-level of the MedDRA, called the System Organ Class, or SOC. This breaks all symptoms into 26 different categories.

The two graphs below show the number of symptoms in the SOC categories. On the left is the entire VAERS database and on the right is just those VAERS events that mention an HPV vaccine and are pregnancy-related. Note that these graphs are made using Expert Mode (to access MedDRA) and then graphing Symptoms SOC (Highest). 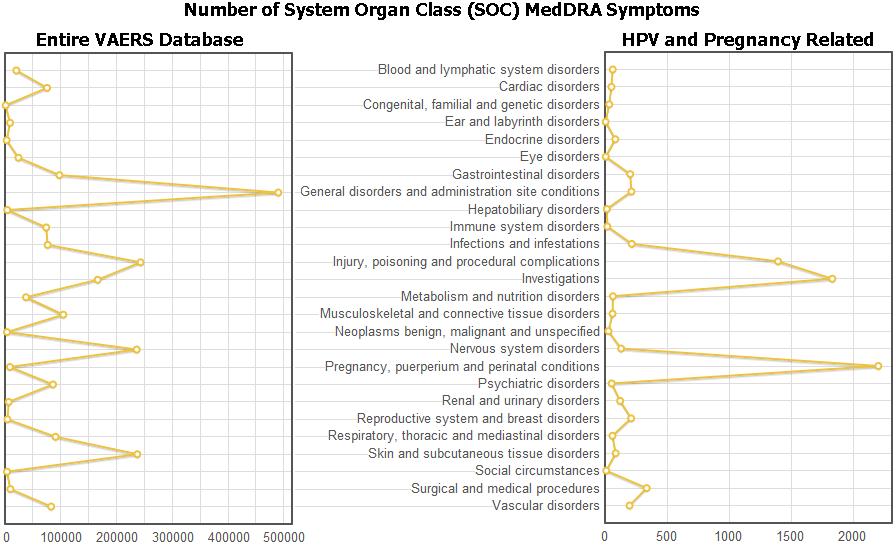 The left graph shows the sort of things that would be expected in a typical VAERS report: a big spike in the broad SOC "General disorders" and other spikes involving injuries, investigations, and skin issues. It is perhaps interesting that "Nervous system disorders" also figure prominently.

The right graph focuses on the symptoms of pregnant women who got an HPV vaccine. It is not surprising that the biggest spike here is for Pregnancy conditions.

But although this graph indicates that the injuries to pregnant women are indeed pregnancy-related, it still doesn't tell us what happens in any sort of detail. To do that, we need a new feature of MedAlerts that lets you see the MedDRA symptom hierarchy. So use Expert Mode and check Show Symptom Tree. You also have to narrow the search to pregnant women who got the HPV vaccine (as described in last month's report). Here is a partial view of the symptom tree, showing the "Pregnancy" SOC as well as the next two levels of the hierarchy. There are two deeper levels in the tree that are not shown here. 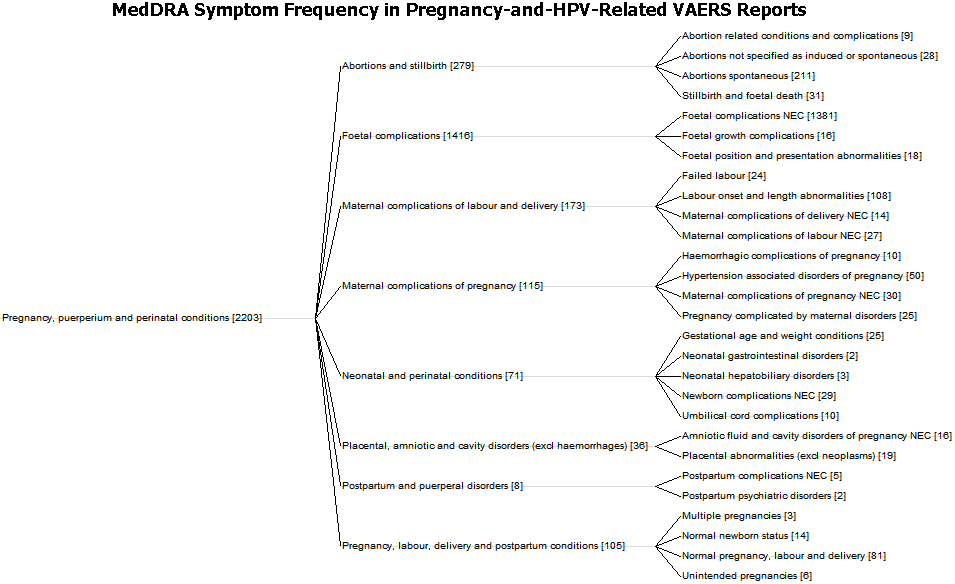 Note that the numbers next to each symptom are not the number of VAERS reports that mention that symptom. Instead, they are the number of times that the particular point in the symptom tree appears in the pregnancy/HPV reports. Since each VAERS report has many symptoms, these points in the tree are visited many times. So the numbers are useful only for comparing relative frequency of a given point in the tree. See the MedAlerts Help page on MedDRA for more information about examining the MedDRA.

As you can see, the most common issue is "Foetal complications" followed by "Abortions and stillbirth" and "Maternal complications". The graph continues deeper, showing more symptom detail. So it appears that, according to VAERS reports involving pregnant women who received the HPV vaccine, they indeed had substantial pregnancy-related difficulties and the pattern of symptoms appears to be different than what is generally reported to VAERS.