A number of sources suggest that the Flu vaccine causes neurological problems (Natural News, Daily Mail, CDC). They specifically mention Guillain-Barré Syndrome, a disorder of the body's immune system which can be life-threatening. Is this true?

To answer this question, we will use a new feature of the MedAlerts search engine: Standardised MedDRA Queries (SMQs). Recall that the MedDRA is a symptom classification, which organizes all known symptoms at five levels of detail. In addition to these thousands of different symptoms, a team of experts at the MedDRA organization have created Standardised MedDRA Queries: groups of symptoms that relate to known medical conditions. Some of the symptoms in an SMQ are defined as narrow (for symptoms that are highly likely to indicate the condition) or broad (for supporting symptoms that do not necessarily indicate the condition).

One SMQ is for "Guillain-Barré Syndrome," and it has 11 narrow and over 800 broad symptoms in it. So let's do a very simple search of the VAERS database to find out which reports have any of the 11 narrow symptoms. Start by checking Expert Mode in the upper-right (to enable SMQ searches). Then make a Graph of Vaccine Type (in Section 1) and select the SMQ called Guillain-Barré Syndrome, with a Narrow SMQ Match (in Section 2).

In addition, let's make a graph of ALL VAERS events by Vaccine Type, and then compare the curves. If the curves have the same shape, this indicates that GBS is not a particular problem. Here are the two graphs: 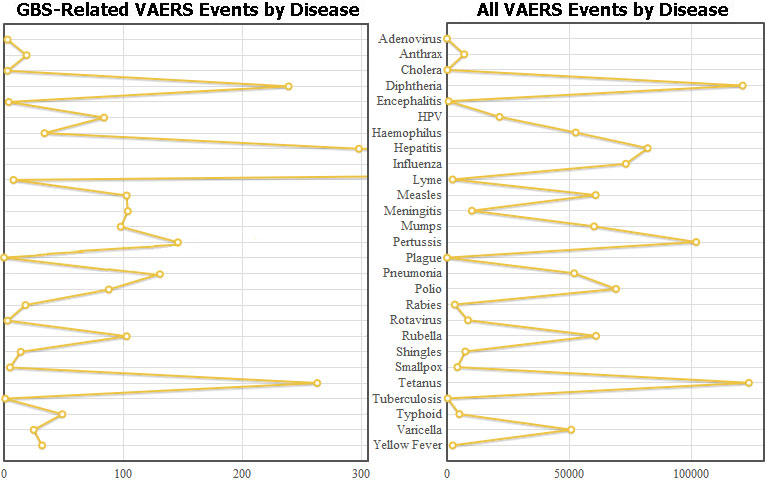 The graphs do have similar shape, except for a few notable differences:

How large is the Influenza spike? Let's look at the left-hand (GBS-related) graph in its entirety: 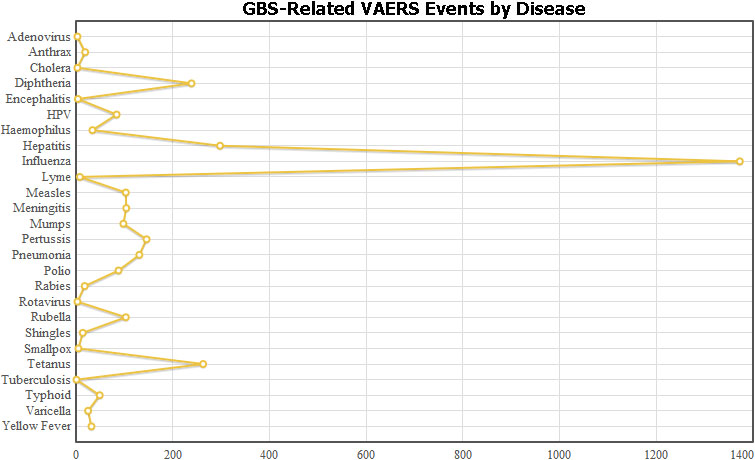 The next question is: which Flu vaccine is causing the problem? To answer that, let's make a graph of individual Flu vaccines and also break it out according to the year of vaccination. The three main culprits are the "Seasonal Flu" vaccine which has been given for decades, the H1N1 Flu vaccine which was introduced last year, and the "10-11" Flu vaccine which is this year's triple-strain vaccine (Seasonal, H1N1, and Hong Kong). 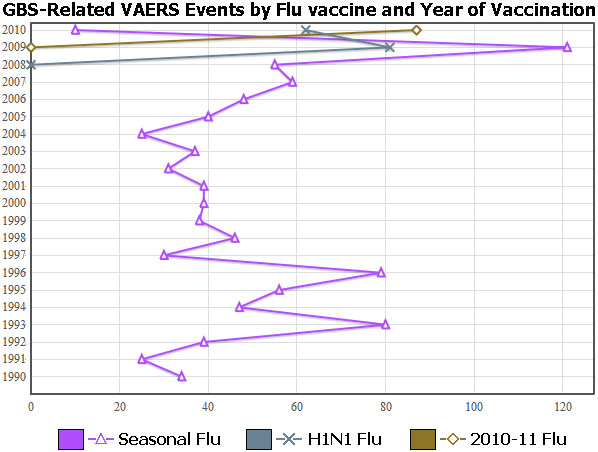 Clearly, all of the different Flu vaccines have the same outcome, with the newer H1N1 and this year's triple vaccine continuing the trend established by the Seasonal Flu vaccine.

So does the Flu vaccine cause GBS? Perhaps. Do VAERS events associated with the Flu vaccine show a significantly higher-than-normal incidence of Guillain-Barré Syndrome? Definitely.