Another year of VAERS data has been published by the government, so it's time for a yearly wrap-up. As I have done in past years, I will look at the number of VAERS events that have been posted since the start of the program in 1990. The search is simple: a Graph of Year of Appearance (the year in which a particular VAERS event appeared in the data):

The graph shows a continuing trend for the past two years: there are fewer VAERS reports being filed. Last year showed a nearly 20% drop and this year continues that trend.

What changed? Let's look at individual vaccines. Make a Graph of Year of Appearance and Vaccine Type (the Vaccine Type is the disease that the vaccine prevents). 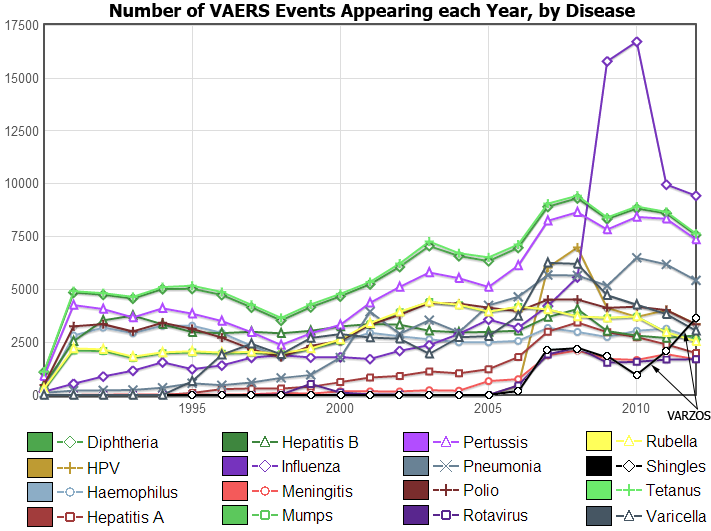 The graph shows that there were fewer reports for nearly all of the vaccine types. There are a number of possible explanations for this:

As a side note, there is one vaccine that has not followed this declining trend: the Shingles vaccine (code name VARZOS, introduced in 2006). Let's look at this vaccine more carefully. The graph below plots the Year of Appearance and Age. 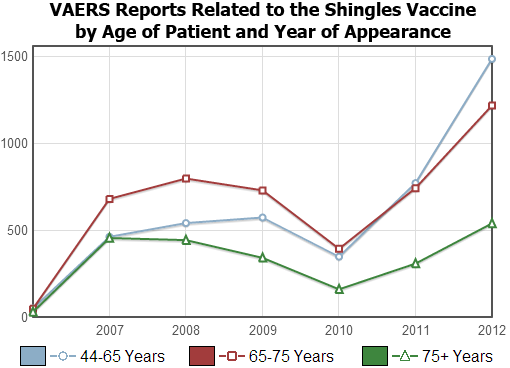 Shingles affects older people, and can be quite painful. The graph shows that all of the older age groups experienced a higher-than-usual incidence of Shingles-related VAERS reports last year.

Is the vaccine dangerous, or are people just now starting to get the vaccine, causing a higher than usual number of reactions? It is impossible to tell at this point, because dosage data is unavailable for 2011 and 2012. But some people should not get the vaccine, as even the CDC acknowledges. So if you are considering getting the Shingles vaccine, check out the warnings before insisting on the shot.