The graph of all VAERS reports (on the left) is not surprising. It show that most VAERS reports involve young patients, which makes sense because most vaccinations are given to children. There is also a peak in the 17-44 category. But this is not a real peak; it is an anomoly caused by the unequal groupings. The 17-44 year range is the widest by a large margin, so it includes a large number of VAERS reports.

The graph on the right (VAERS events where the patient died) is surprising. It shows a much stronger peak among young children (below age 3). This peak is so strong that it even towers over the wide grouping of 17-44 year-olds.

There are really two problems with these graphs: (1) the age groupings are not uniform, making some groupings stand out unfairly, and (2) it would be helpful to analyze the 0-3 year old range in more detail to see exactly when these children are dying.

To solve this problem, MedAlerts lets you set different age groupings. It is another of the site's "special features," so to use it you must check the "Expert Mode" box in the upper-right. Then, instead of making a graph of Age, make a graph of Age, Custom. Custom Age graphs let you specify where you want the age breaks to occur. There are even a few buttons on the right side of the age break section that automatically fill it in with some "standard" schemes.

So let's redo the above two graphs, but this time use the age breaks that CDC Wonder suggests (click "Set Wonder" in the Custom Age section). The results are here: 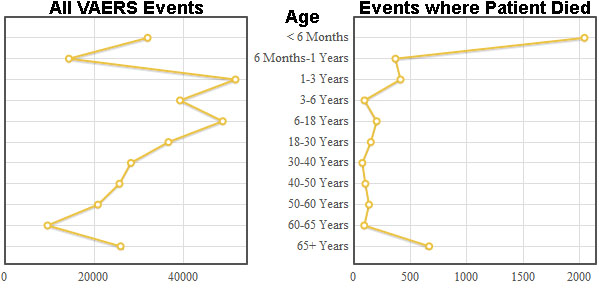 Now the graph of all VAERS events (on the left) does not show such a strong peak in the 17-44 range, but instead has most of its emphasis on people 18 years and younger. This is to be expected.

We also see in the graph of patients who died (on the right) that the peak for young people continues to be pronounced, and that this peak happens in the first 6 months of life.

Can we explore this at even more detail? Just set the age breaks to be even smaller. The graph below sets age breaks at 0.1 years, 0.2 years, 0.3 years, etc. This is the level of resolution that appears in VAERS reports (they seem to report age in tenths of a year, rather than twelvths of a year as you might expect). The graph below shows the age of patients who died in the first year of their life: 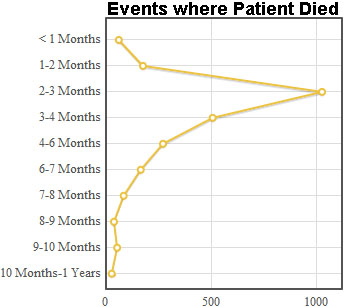 And now we see where it is happening: at about 3 months of age. No other age seems to die after a vaccination as much as these 3-month olds. It makes you wonder whether this is a bad time to get vaccinated.