2010 is over and complete VAERS data for the year has been published by the government. Since 1990, when VAERS began, the number of reports added each year has almost always gone up. But not this year. In 2010, there were 36,818 new reports added, whereas 2009 had an all-time high of 37,181 (really, not very different).

Here is a graph of the number of VAERS events released each year. To see this for yourself, click Show Graph (in Section 1) and graph Year of Appearance.

Last January, I looked at the dramatic rise in the the number of VAERS events during the past few years and analyzed the cause. In that report, I separated the VAERS events according to the vaccines given and the diseases they address. Let's look at that graph again with the 2010 data included. To do this, click Show Graph (in Section 1) and graph Year of Appearance and Vaccine Type. To make it easier to read, I have simplified the graph by removing diseases that are associated with few VAERS events. 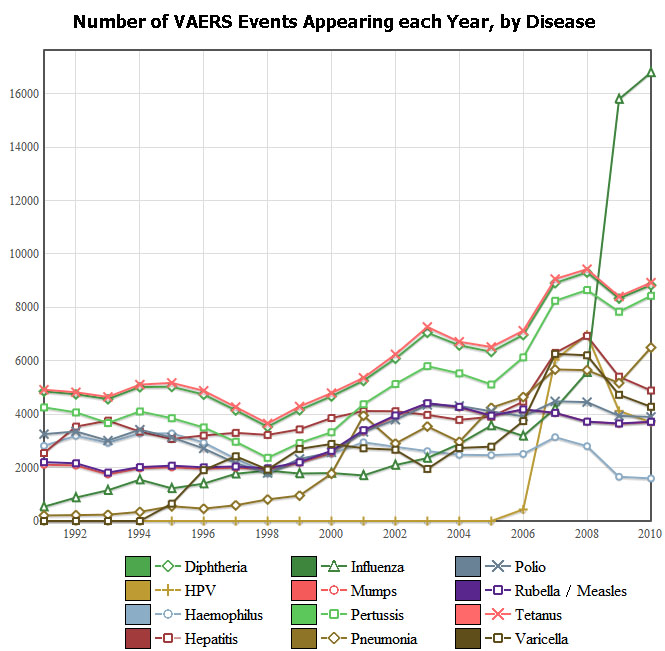 The numbers do not show that.

And what about the 2009-2010 Flu season? The Rand Corporation estimates that during last year's Flu season, 39% of adults were vaccinated, which is only a small increase over typical years.

So it is not reasonable to blame the rise in adverse events following the Flu shot on the increased number of people getting it. There must be some other explanation.

One explanation for the rise in the number of Flu reactions is that during the 2009-2010 Flu season, people got two shots, for both Seasonal Flu and H1N1 Flu. Of course, that would only account for a factor of two rise, not a factor of three. Also, not everybody got two shots. Let's graph the three main Flu vaccinations that were reported in the past two years. The red line is Seasonal Flu, the purple line is the H1N1 Flu, and the green line is this year's Seasonal Flu (which has H1N1 in it). 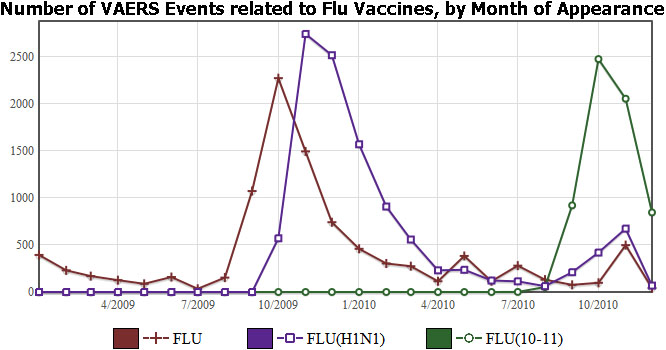 Something is causing an increase in the number of reactions to the Flu shot, and it isn't just that more people are getting it. We should all wonder why nearly half of recent VAERS reports involve people who have gotten a Flu shot.