October VAERS data is out and it has a few surprises.

Four new deaths were reported in conjunction with Gardasil. This is relatively high for a single month. But more significantly, it was the first time in which one of them was a boy. There are now 89 VAERS reports in which the patient died after being given a Gardasil or Cervarix vaccination.

But even more surprising in the October VAERS data is the appearance of 217 new reports about last season's H1N1 Flu vaccine. This batch of bad news lists 14 deaths and another 76 "serious" cases. The H1N1 Flu vaccine has now been associated with 105 deaths.

Why, when this winter's Flu season is in full swing, are we still learning about the last Flu season? The answer has two parts: (1) the new reports are not from the US and (2) they took a long time to get here.

Each of these new reports states in its write-up that it was sent by the manufacturer on August 25 of this year and involves a patient in a "foreign country" (but does not say which). You can find these reports for yourself by searching for "25 August 2010" in the Write-up Symptom field. 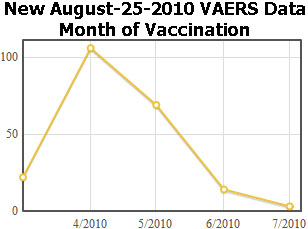 The new reports follow the same pattern as existing data, which peaks at the start of the winter Flu season. But notice that the new data is shifted by half a year and peaks in April!

The obvious explanation for the half-year shift is that these reports come from a country below the equator, where the winter Flu season is in April. That means the data comes from Australia, New Zealand, or somewhere in Africa, or South America.

But one question remains: why, if the data was sent on August 25, did it take this long to appear in VAERS?

Why the delay? It could be pointed-out that VAERS, which is chartered with releasing this data, is also chartered with protecting the identity of the people involved. This "sanitizing" of the data to hide identification probably takes some time. However, most drug companies that collect and submit data to VAERS do a pretty thorough job of sanitizing the data themselves. In fact, the typical VAERS report that comes from a pharmaceutical corporation has so much of the data removed that it is less useful for normal analysis (for example, the state in which the patient lives is often missing).

Regardless of whether or not the full story has been told, this new data from a southern-hemisphere country shows that the H1N1 Flu Vaccine left a wide swath of damage in its path.